Where my journey began…

As I get closer to my goal weight and overall fitness targets, I’ve had more and more people ask me about how I got here. How did I do it? What finally motivated me to stick with it?

Brace yourselves. This is long. But I promise to get there. It may just be a few posts.

Let’s start from the beginning.

I was a skinny kid. To the point where people would ask if I ate enough or thought I must constantly be hungry. I ate a ton and a lot of it was junk, but I was young and didn’t have to think about it. But by college it was a different story.  Suddenly, my poor food choices caught up with me. I went from a size zero to the double digits by the time I graduated. I tried watching what I ate but with no luck, sometimes the call of the warm cookies in the evening was too strong. I had just developed bad habits and didn’t know how to limit ‘indulgences’ like huge pasta dinners, desserts with every meals, etc. It wasn’t until my first job after college that I finally had a breakthrough.

A few ladies in the office put in a bet that we would all join Weight Watchers together and see who could get to our goal weight first. We set little challenges along the way and regularly checked in. At the same time, I signed up for the Bar Method, a ballet/pilates type workout that was just breaking ground in the California Bay Area (this was about 15 years ago). Apparently I’m very competitive and this was the drive I needed.  I was successful with Weight Watchers and was hooked on the Bar Method.  I got to about 5lbs from goal weight and was back to a freshman year college size.  What derailed me?

I was in a toxic work environment and left my job for a different opportunity. This took me away from my workout studio, my WW meeting location, and threw a long commute into the mix. I was sitting on a BART train for almost an hour a day, only after driving 20 minutes to the train and then walking to my SF office. I was exhausted and what time I didn’t spend working and commuting was spent with my husband or sleeping. The weight stayed off for a while, but slooooowly crept back on. Again, cookies and pasta.

All of my hard work was gone and I couldn’t get back on track. I eventually changed jobs to a company closer to home with no commute, but even with Weight Watchers meetings on-site, I couldn’t find the motivation. I wasn’t working out, and I couldn’t stay focused on the plan.

For years I kind of drifted. I took up competitive dancing but probably never realized my full potential because I couldn’t turn my eating habits around. I considered a dance class a couple of times a week ‘good enough’ for a workout routine. I tried WW a few more times but after the first few weeks, I’d get over-confident with the initial big numbers, have a bad day, then drop the program completely (after paying for it for a month or two longer than necessary, of course). My husband had luck with it though and made it to Lifetime membership. 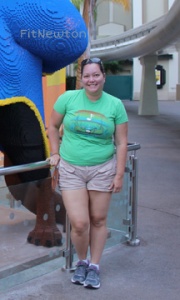 Before I had my first baby boy (Big Fig), I had reached an all-time high in my weight. I was over 200lbs and wasn’t comfortable in my own skin. I hated pictures of myself and was my own worst-critic. I had even been doing Dailey Method (another barre workout) regularly, and dance class once or twice a week, but still couldn’t make healthy eating decisions.  But I had some health issues (not weight related) that had prevented us from trying for Big Fig previously, so I didn’t want to make too many changes as I was going to gain weight when I was pregnant anyways, right?

After having Big Fig, I had naturally lost some weight just from having a baby, and then from nursing. I took that weight loss with over-confidence and told myself ‘well I can just eat whatever I want!’ This was true to a point, but eventually, I stopped nursing and the food and weight caught up to me.

At my sprinkle for Little Fig. Just a couple of weeks before delivery.

In January 2015, I was getting ready to have my second baby. A baby boy that I’ll now call ‘Little Fig’ for the purpose of this blog. Going into this pregnancy, I wasn’t at a healthy place. After I stopped nursing, the weight crept back on, and going into my second pregnancy, I was now heavier than I had been before I had my first, and had gained almost half of the pregnancy weight back. I had taken the approach of ‘well I’m just going to be pregnant and gain weight so might as well wait until I’m done before I do anything about it.’

My doctors warned me that I had to be cautious with this pregnancy and my weight gain as I was already obese. So, I was, but being pregnant, weight still came on as the months progressed. I wasn’t going to starve myself, but I just never necessarily made healthy choices. Other pregnancy side effects actually made it harder to enjoy food as much as I used to so thankfully I didn’t gain as much as I could have, but I still felt miserable. Throughout I would tell myself: ‘after this, I’m going to get my butt in gear.’ Easier said than done, and I had a history of falling off diet plans.

Little Fig made his debut at the end of January. I was going to be on maternity leave for several months, but having had a C-Section, I was on strict orders not to do anything for the first six weeks. I spent that time trying to get into some sort of routine, missing sleep, and figuring out how I was going to entertain myself and a newborn for the next few months. I started to give a little more thought to getting in shape and losing the baby weight.

After having Little Fig, I obviously lost some weight from having a baby. But I was over 245 lbs when I had him. Far over my previous maximum and in fact, at some point I stopped weighing myself and looking at the scale when I went to the doctor’s office. I was embarrassed and ashamed of the way I looked.  My clothes were the largest size without having to go to specialty stores and the thought of doing that stressed me out. I loved my family photos from our newborn photo shoot, but looking at them, I knew it was time to do something.

I started participating in an online page for local moms who were interested in weight loss and a healthy lifestyle. It was an off-shoot of my breastfeeding support group so I knew several of the moms and their kids very well. It was a comfortable, safe environment, and I was able to watch as they did various ‘challenges’ and motivational posts. I was even inspired to begin participating from time to time.  Well right when my six weeks of rest were up, my doctor gave me the go-ahead to start exercising. Around this time a friend on the board suggested doing Couch to 5k. Three of us committed to doing the program together with an end goal of the Run Like a Mother 5k on Mother’s Day. This gave us approximately 6 weeks to get ready with our end goal being that we all wanted to run the entire thing – no stopping or walking.

A larger group on the page were doing Couch to 5k with later goal dates, but we all started together and were able to encourage each other online as we started. Most of us were so out of shape. I couldn’t get through the first round of intervals (jog 45, walk 1:30) without being totally winded. It was so disheartening and intimidating to think that within just a few weeks I would be able to run 30 minutes straight… and then the fact that on race day it would need to be 45 minutes because I was so slow that I was just doing a 15 minute mile. How was this going to work?!

Well, we trudged along. Some days were better than others and my time never really improved, but I started to hate it a little bit less each time.  At first I began doing the intervals with my husband, though just past week 2 he foolishly fell off a small fence, landed wrong and hurt his knee – no more running for him! So, I did it by myself. I then started reaching out to my neighborhood community for walker buddies, and even posted a sign for walking/running buddies at my local YMCA. Concurrently,  I started to be a little more conscious of what I was eating. It wasn’t long before I noticed the weight was finally starting to come off.

When the race day arrived, I had finished the couch to 5k program with my girlfriends and we were ready to run. The course was hilly and the weather was drizzly, but we plugged away and finished the race without stopping! Our final time was just over 45 minutes but we were so proud of what we had accomplished. The big, shiny medal was also the start of an addiction…

In addition, by the week of the race, I had lost all of my pregnancy weight from Little Fig. I was down almost 40lbs from his delivery! I chose that time to join in with the online page’s weekly weigh ins so that I could actually start to track what I was doing on the scale.  I was jogging a couple times a week, as well as taking advantage of some classes and events at my local YMCA. I was just starting on my path to fitness. But more on that and the next 60lbs in my next post.