This weekend was harder than I expected – probably one of the most indulgent ones I’ve had since the holidays (not counting NOLA since I was out of town and I feel like traveling gets its own set of rules).

It really all started on Saturday. We had a busy day with early morning activities for the kiddos. Luckily, I was able to get a bootcamp workout in. I live in the same neighborhood as my trainer who also happens to run a program called Bootcamp Moms. She and another one of my Y instructors run regular classes that are tough. Really tough. I had never been to one of them, but I’d heard from other friends who had been and I really could only imagine after the things my trainer has put me though. Because I had such an action packed day planned, the only time I could fit a workout in was first thing in the morning, so I decided to give their class a try… and y’all know how important I feel it is to step out of your comfort zone! 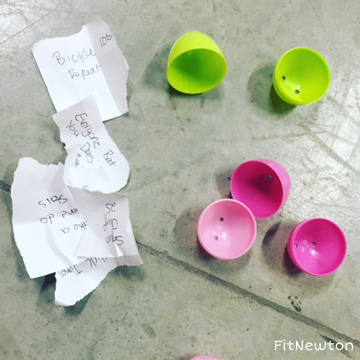 One of the tortures of the bootcamp was an egg hunt with various workouts you had to complete.

Well, the class was awesome, I got home in time to make a new Shakeology recipe and then we were immediately off to the museum for the dinosaur egg hunt. My shake was filling and held me over until lunch time which we had at the museum. Normally, I would pack a lunch if I wasn’t sure what a place would have available, but our local science museum actually has a really great menu filled with lots of healthy options. I ended up with a turkey panini and I scraped off the dressing. That left the flavor of it but I always feel like there’s too much dressing on sandwiches anyways. I had it with a side of fresh fruit and I was good to go… or so I thought! I couple of hours later and we were at our next stop, an egg hunt with friends. I didn’t realize they would have a full spread of food and as it was about the time I would normally have a small afternoon snack, I realized I was a little hungry. Well, once I saw the food, I basically made myself another little lunch. I knew I didn’t really need that amount of food, but for the first time in a while, I didn’t really care. I think it was a combination of exhaustion and just a mentality of ‘I’m going to indulge for once’ that took hold. And while I didn’t necessarily completely fall off the wagon, I did battle with the guilt after. But anyways, after the egg hunt, we ended up going home and for once we were all able to coordinate a nap at the same time. With two toddlers, this feat is a once in a blue moon occurrence so we just decided to embrace it and rest.

Dinner that evening was light, but I spent the rest of the night prepping for our big Easter brunch the next morning. This of course involved making desserts and with that, sampling chocolate that was going on my beautiful carrot cake. Again, not normally an indulgence I take part in, but as it was such a rare treat – we really don’t keep a ton of unportioned out candy in the house – I decided to embrace it, knowing I would be back on track the next day. 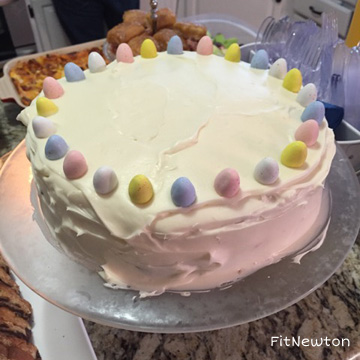 The following morning, we had our big Easter brunch. I made sure to have a balanced plate of some indulgences, but also lots of fruits and veggies. I shared my desserts with my son, both of us only having a few bites of each thing. Luckily, my sweet tooth does seem to have faded slightly in that I can have a couple of bites and be satisfied… I think the sugar starts to get a little overwhelming as I try not to have too much of it on a regular basis. Anyone who knows me and my previous cupcake business wouldn’t believe what I was saying right now but this lifestyle change really has changed my tastebuds and the amount of sweets that I can reasonably enjoy. I’d like to hope that’s all a long-term change though I know I will constantly need to work on it.

Now here’s the kicker: After this feast of food and drink, I had a 10 mile run planned. And not just any ten mile run, but spadework. My running buddy and I agreed the week before that we would try to do ten miles at some point on Easter Sunday, and work on keeping our miles under a ten minute mile average. As a former 16 minute per miler, this would be a big feat for me. I had just completed the Kilt Run last weekend with an average under ten minutes, but that was just for 5 miles. Luckily, my girlfriend had complete confidence in me and pushed me to meet our goal. 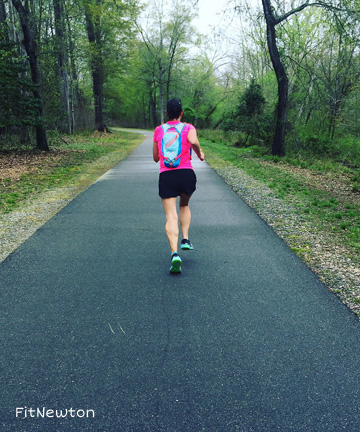 10 miles, and speed-work, all after Easter brunch. I’m a glutton for punishment.

While most of my runs are first thing in the morning and on a very light stomach, this one was not and thus was an extra challenge. We both had indulged this weekend and we pushed ourselves harder because of it. Thankfully, we made our goal and had that fantastic feeling of accomplishment afterwards.

So now, on to the week! I’m ready to take back control. Our meal planning is done, and we really tried to focus on healthy options to ensure that we could keep on track with our weight loss goals for the week. I also planned out some pretty intense workouts as I want one last push before I do a lighter load next week in preparation for Rock N Roll Raleigh.

I don’t always do so many workouts in one day, but again, I’m trying to reach my final weight loss goal and toning for the summer so I’ve been really pushing it. I also find that it’s better than me just surfing the web all night in the evening or sitting in front of the tv.

Oh, and here’s my latest favorite Shakeology recipe! I haven’t seen it around, though there’s so many out there, I’m sure someone has come up with something similar! This is a great, filling shake first thing in the morning, or when I know I’m going to have to go a decent stretch between meals. I’m so hooked on the Cafe Latte flavor that I just ordered that this month so I could play with different variations on it. 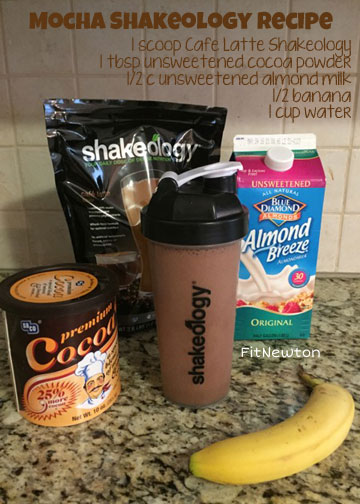 I add ice and then blend. It’s a delicious mocha flavored smoothie and now in heavy rotation in the house.

Let me know what you think! What’s your favorite Cafe Latte Shakeology recipe?