Will run for wine

So much has happened this week that last weekend already feels so long ago. But I had such a fantastic time that I wanted to relive it.

Last weekend, I took a trip to Virginia for the Destination Races Wine Country Half Marathon. It was my first time in Virginia, and I was looking forward to seeing out their wine country, especially being from Northern California and missing any sort of wine country since we moved to North Carolina.

Not only that, but this was planned out to be an epic girl’s weekend away. 8 out of 9 of us had little ones back home and we were excited for a relaxing weekend (ok, well, there is the run aspect) of wine, sitting pool side, some pampering… and oh yeah, back to that run. This was going to be the first half marathon for some of the ladies in our group, and we had been cheering each other on virtually and sometimes doing runs together when possible as were were scattered all over the East coast.

Early Friday morning, my girlfriend Stephanie and I began the 4.5 hour drive to Virginia. It’s so much different than my previous drives from NorCal to SoCal! While not necessarily much to see, the trees and highway headed north was beautiful. My first observation upon entering Virginia was the giant ‘Virginia is for lovers’ welcome sign. My second was the huge amount of highway patrol on the road. Wow, they’re not messing around! Thankfully, it was a fairly uneventful drive aside from minor traffic around highway interchanges.

We made it to the hotel around noon, and were able to check-in, hit up the race expo, and get to the pool for lunch in record time. We had to kick it off with a celebratory drink while we waited for everyone else to arrive. 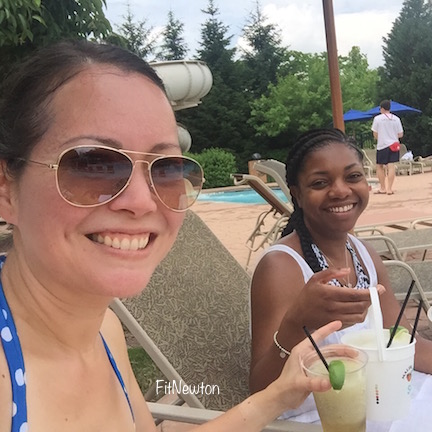 Hanging out poolside with Stephanie

Several hours later, the rest of our group trickled in. The timing was perfect as we had to leave the pool area due to some gloomy weather headed our way. Humidity was high and so was the chance of lightning and storms. We went back to the expo to meet with our friends and picked up some awesome race swag. Afterwards, we hit the gym for a short run on the treadmill, just to get our blood flowing after being trapped in the car for so long. Then, our first group dinner.

The next morning, we were up WAY too early. Like creeping on the 4am range. Yuck. But we were staying at the host hotel, Lansdowne, so we luckily were on the main bus route to the race start line. We were on the shuttle by 5:30am and at the race start line at almost 6:30am. Race jitters were upon us so we were pretty awake by that point. The race start and finish was at the beautiful Doukenie Winery. I was so excited to be done with it just so that I could sit back and take in the views (um, and wine. Obviously). 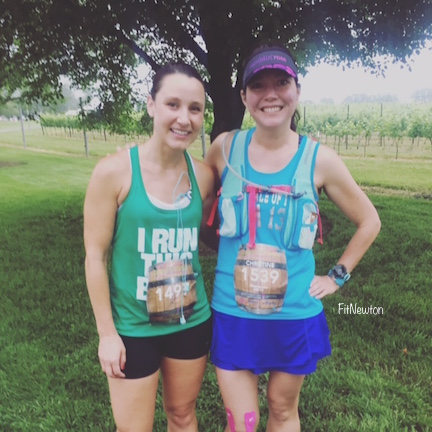 Met Dorothy from Mile Posts and creator of #irunthisbody

We split into our various pace groups. I was going to run with Alex as long as possible and try to stay in front of the 2:15 pacer. That ultimately ended up being too challenging. I was a little disappointed that I couldn’t keep up, but I know it was going to be a hilly course. What I did not plan on was the humidity. Yuck. I felt like I was eating the air. It was hard because I felt like the overall temperature was PERFECT! It felt strange to say ‘I’m hot’, but I was drenched with sweat. I didn’t realize it until I started looking around and noticing I wasn’t alone in that. Everyone else seemed to be on the struggle bus, too, so I was glad to not be alone. Alex and I split around mile 6. I didn’t want to hold her back and I knew I wouldn’t be able to keep up with the 2:15 pacer. A couple of miles in, I turned on my music and just ran. Everything felt good. The mile 9 marker came up and I could so very much relate. I went to take a picture of it… and my phone died. Apparently it had set itself to take pictures of my pocket. Like, 400 pictures. So the battery drained itself. My music… gone. Now it was just me and my brain. Oh, and the hills and humidity. Awesome. But I kept on chugging. I took a brief walking break at mile 10 so I could get in some electrolyte jelly beans. I felt like I needed the boost. But then I told myself I just had 5k to go and I was off. 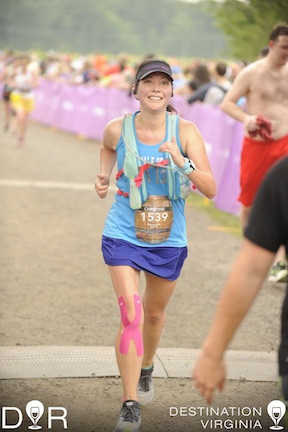 Surprisingly, it wasn’t too hard. I made small talk with people around me, though we all were pretty focused on just finishing by that point. The final stretch to the finish was a welcome sight. But it was also probably the longest mile ever. I had thought my Garmin was off when I first saw the drive approaching but nope, it really was that long. I sprinted (ok, it was probably more like a faster jog) to the finish, and ultimately made it in 2:18:11. My original goal was to be around 2:10 like RnR Raleigh, but I knew pretty early on that it wouldn’t happen. Part of me was disappointed that I took the walking break which probably kept me from the 2:15 mark, but at the same time, eh, it was just one of many events I do at this point. There’s always next time and I still had a lot of fun. And the medal? It’s massive! One of my biggest yet. It’s a wine bottle coaster with the Virginia half design engraved on it. It’s so darn cool! So yeah, totally all worth it. Where do I sign up for the next one? 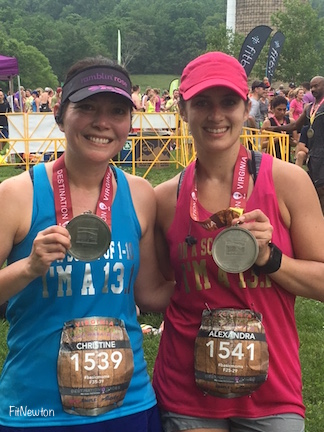 Showing off our new bling

I met up with Alex at the finish and we immediately went and picked up our post-race wine glasses and went to watch the rest of our group cross the finish. It was great to be able to see them cross the finish line – most for the first time in a half marathon! 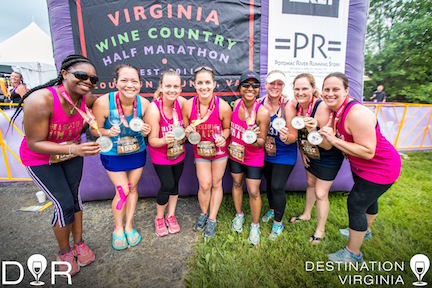 We took a bunch of pictures (obviously) to celebrate the occasion and started to head over to the wine festival. The wine tasting was nice, though the lines were pretty long and we were all pretty exhausted. We hung out for a while and then headed back to the shuttle area. Once we got back to the hotel we met up pool-side for lunch, then most of us hung out at the spa (the jets of the hot tub on our legs was heaven!), and finally, a last night out as a group for an amazing dinner at the Wine Kitchen. 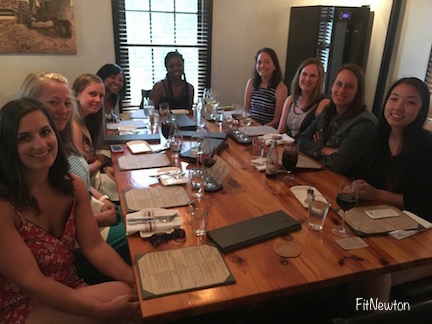 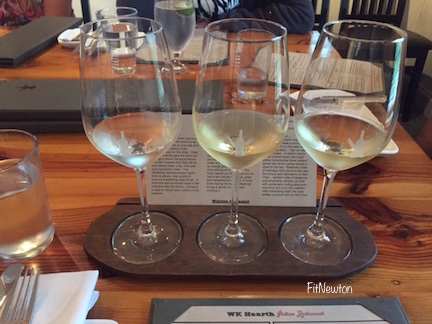 It was an amazing weekend. It was so great to spend the time with girlfriends, get our run in, but have so much fun in between. Well, and yeah, the run was fun too, but you know… 😉